The original anti-kickback statute (AKS) was passed in the early 70s to protect the Medicare and Medicaid programs.  In general, AKS prohibits any provider from receiving any remuneration in connection with the furnishing of the provider’s services.  The (money or benefit) statute has been amended a number of times since its creation to increase criminal penalties and to broaden certain definitions relating to kickbacks and bribes.

Recent enforcement efforts have included all aspects of healthcare.  Lab provider fraud has been one of the more frequent ones.  In several cases providers have received consulting fees, payments for handling and drawing blood far above market rate, phony leases, etc.  In other words, the prohibited kickbacks were disguised as rental payments, processing fees or consulting fees.  EHR systems have also provided an opportunity to violate AKS.  Although the provision of EHR assistance to healthcare providers was allowed under a safe harbor of AKS, basing the amount of EHR payment assistance on referrals or expected referrals did not stay within the safe harbor and was a violation.

Hospitals have also seen their fair share of AKS claims.  In most cases, the AKS violating “remuneration” was attempted to be disguised as sham lease payments, provision of PA’s and NP’s, staffing perks, teaching contracts, consulting fees or medical director fees that were unjustified or above market.

How do investigators locate and identify these AKS claims?  Often times by whistleblowers whether employees or competitors or other physicians who aren’t receiving these payments complain about them to CMS or state authorities.  Sometimes AKS claims arise as incidental claims when other claims are being investigated because of the unusual amount or frequency of certain referrals.

Recent cyber attacks including ransom ware attacks prompted many calls for advice.  We are happy to respond 24/7 to such concerns and to provide assistance to our clients.

Conflicting statements from the current administration have unnerved immigrant doctors.  An Obama initiated program protected such doctors by providing them with work permits and avoiding deportation.  The current administration had earlier indicated that it would stop the program and begin the deportation of the immigrant doctors under the dreamer program but has relented, at least for now.  These doctors have received substantial support from Senators and others who have suggested not only America’s need for these doctors, but also the moral obligation under the Deferred Action for Childhood Arrivals (DACA) program which was protecting approximately 70 undocumented students enrolled in medical schools.

CMS recently released guidance on how providers should prepare for patients arriving with new Medicare identification cards.  These cards will stop using social security numbers and feature a new Medicare Beneficiary Identifier (MBI).  These numbers are to be randomly assigned and are designed to reduce fraud and identity theft by not utilizing social security numbers.  The full replacement is scheduled by April 2019 but providers are required to begin accepting the new MBI cards in April 2018.

Are You Still Waiting?

The New England Journal of Medicine reports that financial incentives keep doctors from reducing patient wait times.  Two CMO’s opined that the fee for service system rewards long waits for appointments with specialties and over booking to squeeze in sicker patients.  If practices maintain a higher-acuity mix of patients they tend to financially benefit.  They also suggest that healthcare systems benefit from long-waiting patients turning to hospital systems to provide care through ER and other settings.

I Want My Data Back

It appears that some providers who have been victims of ransom ware attacks have failed to report these incidents as breaches to OCR (HHS Office for Civil Rights).  Last year OCR provided a guidance which required organizations infected with ransom ware to report the incident unless there is a low probability that patient data has been compromised.  Given the nature of ransom ware attacks which are generally anonymous extortions, it is difficult to determine how a provider, hospital or their IT supplier could determine that a ransom ware hacker is unlikely to have compromised patient data or is likely to behave in the future and not attempt to sell or further distribute the data.  It is unclear whether OCR will take action against the providers who have failed to report the breach even though they have been publicly identified in news reports.  If OCR takes action it could help resolve any lack of clarity. 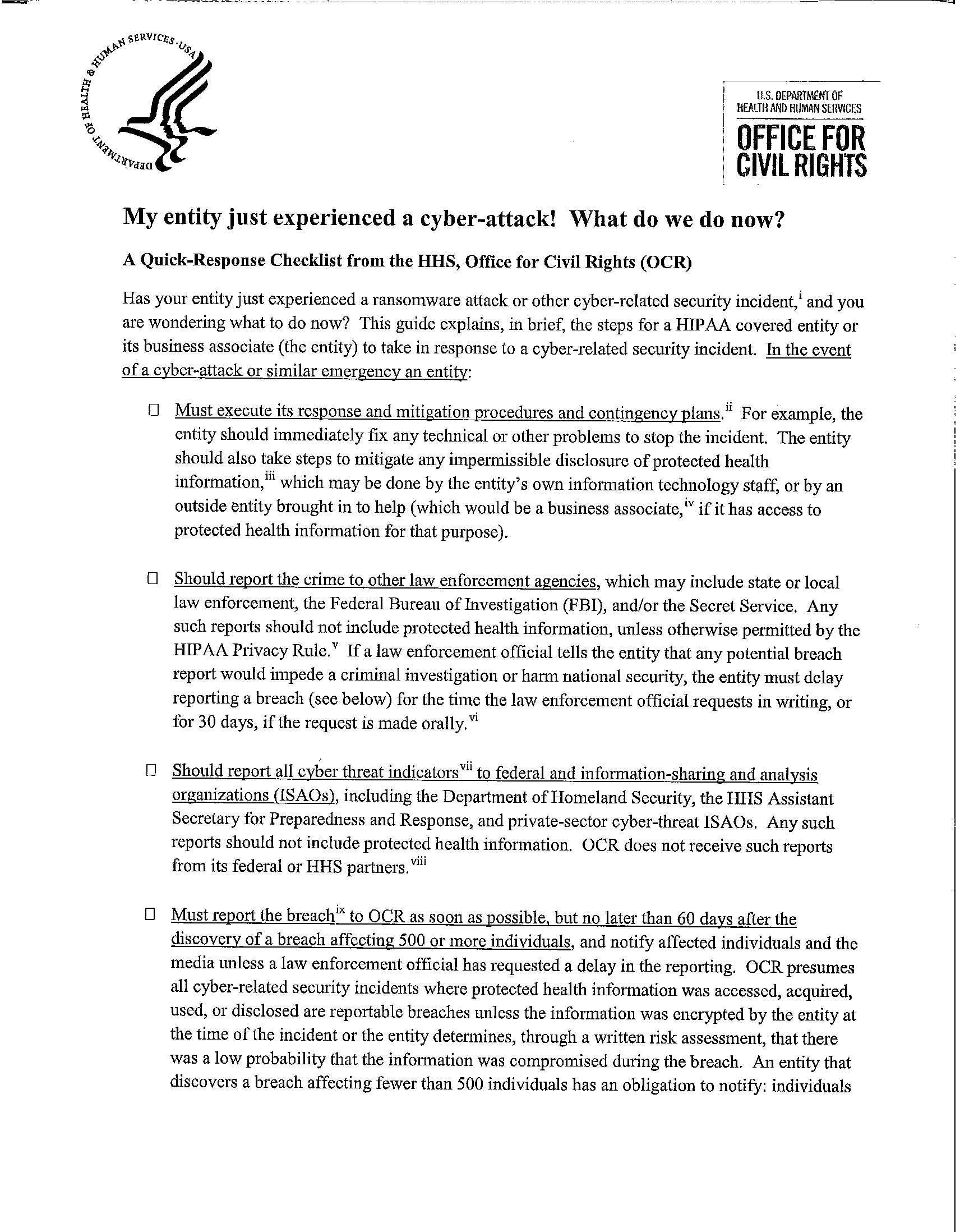 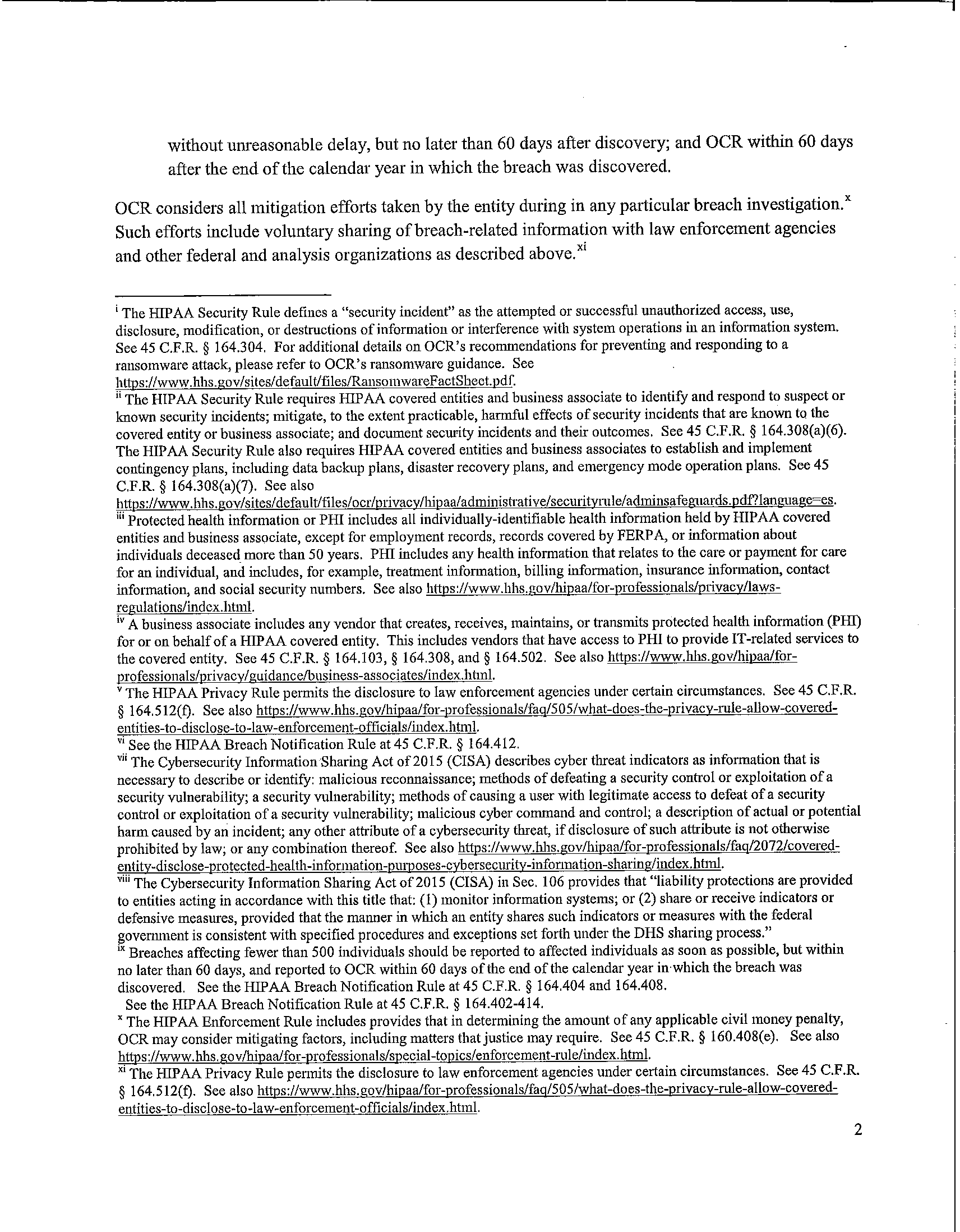